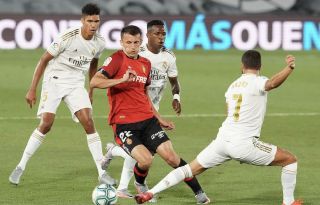 Leading football transfer expert Fabrizio Romano has confirmed that Manchester United, as well as other clubs, are not in talks to sign Real Madrid attacker Vinicius Junior.

There had been recent speculation suggesting Real Madrid president Florentino Perez had included the Brazilian attacker in discussions over the possible sale of defender Raphael Varane.

However, despite the initial excitement that one of Europe’s most exciting attackers could make the switch to England’s top-flight, Romano has now squashed those rumours.

Taking to his official social media on Thursday morning, the Italian journalist revealed that there are currently no talks taking place which include the South American.

Real Madrid are not considering to sell Vinícius Júnior this summer. There are no talks with Manchester United or any other club. ⚪️🇧🇷 #Real #MUFC

Since arriving at the Santiago Bernabeu, the 21-year-old wide-attacker has gone on to feature in 118 senior matches, in all competitions, directly contributing to 37 goals, along the way.