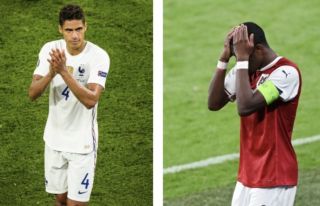 Having opted against renewing his contract with Bayern Munich, Alaba, 29, decide to depart the Bundesliga giants in favour of a free transfer to Real Madrid.

Preparing for the new 2021-22 season with his new club, prior to putting pen-to-paper Alaba may have been hoping he’d line up alongside 2018 World Cup winner Varane.

However, following intense speculation that the commanding French defender could join Ole Gunnar Solskjaer’s side, Alaba has broken his silence on the prospect of seeing his new teammate swap white for red.

“Of course I would love to play with Varane,” Alaba said during his unveiling on Wednesday, as quoted by Goal. “For many years he has played excellent football and not just now. He is a wonderful defender and has great qualities.”

After joining from RC Lens, Varane, 28, has been with Real Madrid for the past decade and has featured in 360 senior matches, in all competitions, scoring 17 times, along the way.