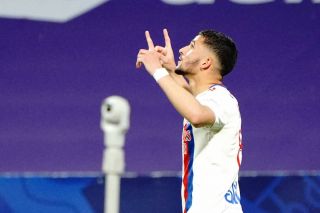 He was one of the names being tipped with a big summer move this time last year, however, after failing to secure a transfer away from French side Lyon, midfielder Houssem Aouar was forced to remain in Ligue 1 for at least one more season. However, if recent reports are anything to go by, this summer could be the time that fans finally see the highly-rated attacking midfielder move on.

That’s according to a recent exclusive report by French outlet Le10Sport, who claims the French midfielder is wanted by a trio of Premier League clubs, including Manchester United.

It has been noted that alongside Ole Gunnar Solskjaer’s Red Devils, Aouar, 23, is also being admired by Liverpool and Tottenham Hotspur.

Le10Sport believes Jurgen Klopp’s Reds have positioned themselves as frontrunners to sign the talented creator, but only because the departure of Gini Wijnaldum means they do not have to sell before recruiting.

However, United and Tottenham Hotspur are different and only expected to up their interest in the Lyon skipper if either side sees one of their star players leave.

Similarly, United is understood to have highlighted the 23-year-old as one of two ideal long-term replacements for World Cup winner Paul Pogba.

It has also been noted that Lyon would be prepared to sanction a move for Aouar should a bid of around €35m be put on the table.