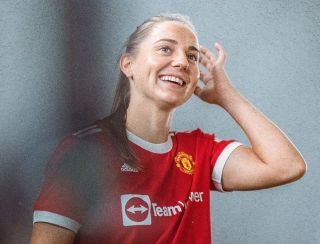 The Norway international has just signed on a deal until the end of the 2022/23 season, with the option of a further year.

After spending the majority of her career playing in Norway and Sweden – for clubs such as Arna-Bjornar, Goteborg FC and Sandviken – the 26-year-old is ready to experience football in the WSL with Manchester United.

Bøe Risa has 37 caps for Norway after making her international debut in 2016 and her experience will be key in United’s first WSL season without Casey Stoney as manager.

She played a part in Norway’s run to the quarter-finals of the 2019 Women’s World Cup in France.

On joining United, Bøe Risa told ManUtd.com: “I’m happy to be here, at such a big club that I have grown up supporting. Manchester United is huge in Norway so to be able to come here and play for the team now is a dream come true.

“I am really looking forward to playing in the WSL and I want to help the team as much as I can in qualifying for the Champions League. I’m so excited to get to know my new team-mates and, of course, I hope I can see the fans in the stadium soon too.”

Give a big United welcome to our first signing of the summer: @VildeBoeRisa! 🤩👋#MUWomen pic.twitter.com/dZXbM7fbzn

John Murtough commented: “We’re delighted to welcome Vilde to the club, she has all the qualities required to be a Manchester United player and we know she can have a great impact here. She reads the game so well and is a fantastic playmaker with great vision and link-up play.

“Vilde brings leadership skills from her time in Sweden, along with Champions League experience, which is something the club is striving for. She is just one of a number of key signings we are making this summer as we look to build on last season with the women’s team.”