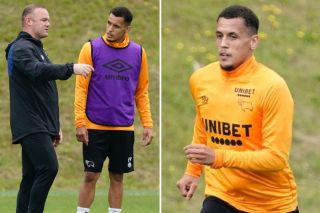 Manchester United will kick off their preparations for the 2021-22 campaign with a pre-season trip to Derby County on Sunday afternoon.

Derby narrowly escaped relegation from the Championship on the last day of the season, with a 3-3 draw against Sheffield Wednesday, and our last memories of watching the Reds came with a disappointing defeat on penalties against Villarreal in the Europa League final.

Tomorrow will be about getting the players fit for the new season and hopefully Ole Gunnar Solskjaer will use the pre-season matches to try different playing systems to prepare the lads for a big campaign.

Nobody should worry about the result, but try telling that to Arsenal fans who wanted their manager sacked after losing a friendly against Hibernian… (Although they may have a number of other reasons for wanting Mikel Arteta out!)

The two sides last met in 2020 in the 5th round of the FA Cup, with United winning 3-0 thanks to a brace from Odion Ighalo and a goal from Luke Shaw.

However, Derby have released a number of players this summer but that could see Rooney field some trialists.

Ravel Morrison and Phil Jagielka are both training with the Rams and will be looking forward to getting some minutes under their belt against Premier League opposition.

Meanwhile, Solskjaer has a chance to play some of his younger players with several stars absent due to being away on holiday after the Euros and the Copa America. Those include stars such as Harry Maguire, Luke Shaw, Marcus Rashford, Bruno Fernandes, Diogo Dalot, Victor Lindelof, Paul Pogba, David de Gea, Edinson Cavani and Fred.

Eric Bailly and Amad Diallo have also been included in the Ivory Coast squad for the Tokyo Olympics.

What channel is Derby County v Manchester United on?

All pre-season matches will be shown exclusively on MUTV, the club’s official channel.