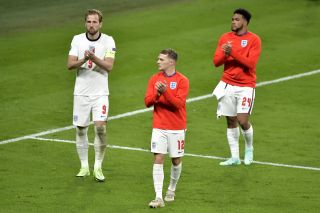 Atletico Madrid and England star Kieran Trippier is confident that he will be making the move to Manchester United this summer, according to reports. The club’s interest in Trippier has been widely reported and the former Tottenham star is now optimistic over his chances of a return to England.

That’s according to the Manchester Evening News, who even say that Trippier made arrangements to return to Manchester before he took part in this summer’s European Championship.

Furthermore, it is claimed that Trippier has entered the final year of his contract at Atletico Madrid, despite some reports elsewhere claiming that he has two years remaining.

MEN go on to say that much of United’s focus this summer has been on completing a deal for Jadon Sancho, and then Raphael Varane but that the club is keen to complete a third major signing.

Trippier has been suggested as an able backup for Aaron Wan-Bissaka but according to the report, the former Manchester City youth player has no intention of acting as his understudy.