According to recent reports, Spanish side Atletico Madrid would like to sign Manchester United midfielder Jesse Lingard.

That’s according to a recent report from 90min, who claim the English midfielder has emerged as a possible summer transfer target for last season’s La Liga winners.

After joining the Hammers in January, Lingard went on to emerge as a late contender to be considered one of the league’s best players.

Having featured in 16 Premier League matches, the 28-year-old midfielder was able to directly contribute to a whopping 14 goals.

Despite now returning back to his parent club, widespread reports have suggested the midfielder is wanted back by West Ham, but this time on a permanent deal.

However, recent reports have also claimed the London-based club are struggling to afford the £30m transfer fee United are commanding.

The latest in the ongoing saga comes from 90mins, who have now reported that the United man is wanted by Atletico Madrid, who could look to capitalise on West Ham’s woes.

The outlet rightfully mentions the possibility of fans seeing Lingard being exchanged for defensive target Kieran Trippier – however, although this may be an option, it is not a deal that has so far been discussed. 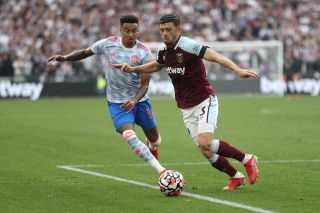