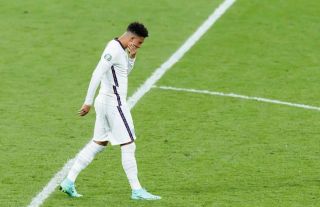 Jadon Sancho has issued an apology to his England team-mates and supporters following his missed penalty in England’s Euro 2020 final defeat to Italy. The winger, soon to join Manchester United, also called for those who sent him, Marcus Rashford and Bakayo Saka racist abuse to be punished.

Sancho, 21, was introduced by Gareth Southgate in the final minutes of extra time at Wembley before stepping up to take England’s third penalty.

Rashford hit the post before the Borussia Dortmund star’s penalty and Italy’s Gianluigi Donnarumma stopped both of Sancho and Saka’s spot-kicks – meaning England’s 55-year wait for major silverware drags on.

It sickened us to see Sancho, Rashford and Saka receive racist messages following the final, and it’s time the social media companies actually did something about it.

Sancho took to Instagram to write (as quoted by Sky Sports): “I’m not going pretend that I didn’t see the racial abuse that me and my brothers Marcus and Bukayo received after the game, but sadly it’s nothing new. As a society we need to do better, and hold these people accountable.

“Hate will never win. To all the young people who have received similar abuse, hold your heads up high and keep chasing the dream. I am proud of this England team and how we have united the whole nation in what has been a difficult 18 months for so many people. Much as we wanted to win the tournament, we will build and learn from this experience going forward.

“I want to say a massive thank you for all the positive messages and love and support that far outweighed the negative.”

Most of the accounts sending the abuse were anonymous. Surprise, surprise.

Marcus Rashford broke his silence on Monday, thanking those who had supported him through another difficult weekend.