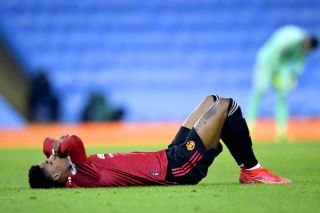 Manchester United winger Marcus Rashford could miss the next three months due to his troublesome shoulder injury, according to reports. Rashford has been carrying the problem since last year but has held off on surgery but could now miss a large chunk of next season.

That’s according to The Telegraph, who say that the 23-year-old has decided to press ahead with the procedure after initially waiting until after this summer’s European Championship to address the shoulder injury. Rashford initially suffered the injury in November last year but played on for the rest of the season.

The latest reports claim that Rashford could now miss the first two months of the Premier League season with surgery unlikely until the end of July.

Furthermore, The Telegraph says that surgery at this stage is not a necessity as the tear in his shoulder is not expected to worsen but Rashford is concerned after not seeing any improvement. The England international fears ‘that his movement will continue to be inhibited’ if he does not go ahead with the procedure.

Rashford remained coy over his shoulder problem after the Europa League final defeat to Villareal, insisting that he will address the issue after his England commitments.