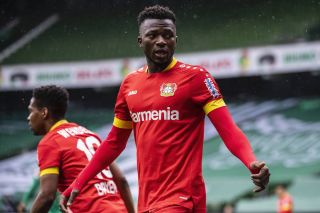 Manchester United target Edmond Tapsoba is set to miss the start of the Bundesliga season after suffering an injury, according to reports. The highly-rated centre-back is reportedly one of the players shortlisted by the club in their pursuit of a partner to Harry Maguire.

According to credible Sport1 journalist Patrick Berger, the 22-year-old defender is on Manchester United’s shortlist but has also been sounded out by Premier League rivals Chelsea and Arsenal.

Edmond Tapsoba (22) who is on the shortlist of Chelsea, Arsenal & Manchester United has suffered a syndesmosis tear. The centre-back will miss the start of the Bundesliga season. He has no release clause in his contract (until 2026). Asking price of Bayer Leverkusen was €60-70m.

Tapsoba is contracted to Bayer Leverkusen for five more years, having recently committed to a long-term deal at the German club. The report from Berger also claims that Leverkusen are intent on demanding €60 – 70m for the player, should any side present genuine interest.

Any potential deal could now, however, be scrapped after Berger revealed that Tapsoba is set to miss the start of next season with a serious ankle injury. The Burkina Faso international joined Bayer Leverkusen in 2020 and has enjoyed a meteoric rise in Germany.