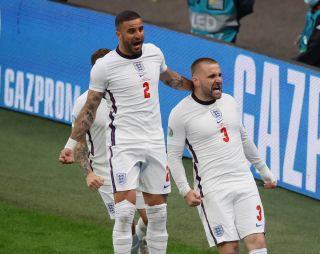 Luke Shaw has offered his support to his England teammates after losing to Italy in the Euro 2020 penalties. The two sides could not be separated after 120 minutes but misses from Marcus Rashford, Jadon Sancho, and Bukayo Saka meant that the Three Lions were made to wait for their first Euro win.

The 26-year-old has now sent a message in support of the three aforementioned players, insisting they are all united after the disappointing loss.

“I think the most important thing is for us now as a team to be there for him (Saka) and give him a big hug and tell him to keep his head up,” Shaw is quoted as saying by The Sun.

“It happens. It is a penalty shoot-out – anything can happen, as a lot of people know. It is an experience he will learn from but we will all be behind him, he knows that.

“It is not just him, though. There’s Rashy and Sanch also. We’re with them all. With this team, there are no individuals who cost us.”

Shaw and Rashford are now set to go on vacation, with a return to training not thought to be planned until late this month or early August. Jadon Sancho, who has remained tight-lipped on his future, will complete a move to Manchester United now that his involvement in the tournament is over.