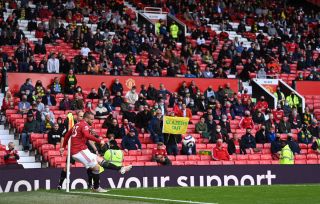 Manchester United fans won’t need reminding to know that the 2020/21 season was blighted by their inability to defend set-pieces, having conceded 14 goals from them throughout the campaign – only Leeds United (15) conceded more.

On top of the shocking record, the goal conceded in the Europa League final loss to Villareal also came from a dead ball situation.

However, Ole Gunnar Solskjaer seems to have acknowledged the area as one in desperate need of improvement as the club has now seemingly moved to address the situation.

Supporters have taken to social media to celebrate the appointment of Eric Ramsay from Chelsea, with some even tweeting in disbelief.

I genuinely can't believe we got a set-piece coach pic.twitter.com/BrlHy8ZAVx

We actually got a set-piece coach… 🤩

The new set-piece coach could be even more important than the Sancho signing this year. Finally! 🙏🙏🙏 #MUFC

Manchester United hiring a set-piece coach is the way football should and will be going.
Set-pieces should never be under-estimated, their impact is immense: The Euros have also shown its importance. Do not overlook set-pieces, or it might backfire very quickly.

Ramsay is believed to have already been taking part in training sessions with the makeshift pre-season squad as the first-team regulars slowly make their way back into the fold.

“We’ve been fortunate enough to convince Eric Ramsay to come and join the best club in the world and in the country,” Solskjaer told ManUtd.com on the appointment.

“We’re excited. He’s young, fresh and with new ideas, an innovative coach we know from before. Kieran [McKenna] knows him really well from Loughborough, so we’re very pleased with that.”