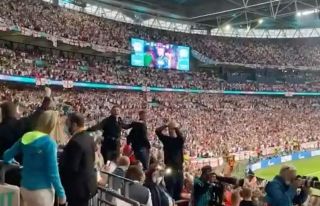 It’s all going to plan for Gareth Southgate’s England side after taking the lead just 2 minutes in, against the Italians.

The goal was magnificent as Kieran Trippier picked out Luke Shaw at the back post before the Manchester United left-back volleyed his effort home.

There’s a lot of time left to play on the clock and Italy have yet to respond.

And if Shaw keeps going at this rate, the Englishman will have claims for player of the tournament.

Wembley erupted after Shaw’s opener, as seen below (footage courtesy of Goal):

A win for England could see several United players return for the new season with a spring in their step.

Unfortunately, it wasn’t the case for Fred last night as Brazil lost to Copa America final versus rivals Argentina.