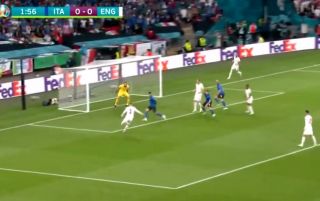 Luke Shaw has just scored his first ever goal for England in the Euro 2020 final.

Italy are behind after a perfect start from England after Kieran Trippier sent a beautiful cross over the top for Luke Shaw to hammer home.

The Manchester United left-back has been terrific throughout the tournament and what a wonderful goal to get the final underway!

It only took two minutes for the Three Lions to let off their first roar of the match and it will be intriguing to see how the Italians respond.

WHAT A FINISH! WHAT A MOMENT! WHAT A TIME TO SCORE YOUR FIRST @ENGLAND GOAL!

THE PERFECT START! THE FASTEST GOAL EVER IN A EUROPEAN CHAMPIONSHIP FINAL!!! #ITAENG | #ITVFootball | #Euro2020 pic.twitter.com/wpNZAjOBE3

Italy have a hill to climb sooner than they expected.