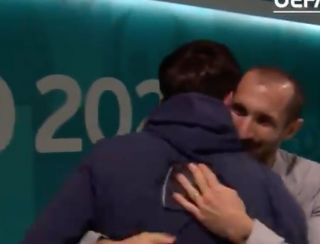 We are under an hour away from the Euro 2020 final at Wembley, where England take on Italy for the big prize in European football.

Two Manchester United players are starting for the Three Lions — Harry Maguire and Luke Shaw — while Marcus Rashford has been named on the bench alongside Jadon Sancho, so Gareth Southgate has plenty of attacking options he call call upon.

Both teams have arrived at Wembley which has built an atmosphere since this morning. Proper football fever.

When Italy captain Giorgio Chiellini arrived at the stadium, he was greeted by Manchester United skipper Harry Maguire, who he called “big man”.

And then does a dance as he walks off 😂#EURO2020 #ITA #ENGpic.twitter.com/a9LVkupSRx

Stay tuned throughout the match for updates from the Stretty News team. We will be keeping an eye on how the United lads get on tonight.

Let us know who you think will be champions in the comment section below.