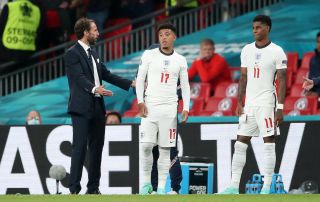 Euro 2020 has ended in tears for England with Italy crowned European champions.

Gareth Southgate’s last-minute substitutions for the shootout backfired, with both Marcus Rashford and Jadon Sancho missing their penalties, as well as Arsenal’s Bukayo Saka.

I have no doubt there will be newspapers – presumably the Daily Mail – who will take aim at the players mentioned above, but it was the England manager who was guilty of not making the right changes at the right time.

Ultimately it should fall on Gareth Southgate.

Before the game, if I said this match would go to penalties, I think most football fans would have predicted an Italy win.

Then to expect two young lads, who haven’t featured much in the competition, to come on with 2 minutes to play in the final and expect them to stand up in a penalty shootout with the pressure of a nation on their shoulders?

Southgate has barely given Rashford or Sancho a minute in this tournament. Either you have faith in them or you don’t. To overlook them for weeks and then expect them to show up as your first choice penalty takers, when barely giving them a touch, is unfair. Poor management.

Talk about setting players up to take the blame away from himself.

A throwback to 1998 when David Beckham was sent off and England were knocked out of the World Cup.

An effigy of the Manchester United midfielder was hung outside a pub in London prior to our away game against West Ham in the 1998/99 season.

Other United players to be poor treated by England — including Rio Ferdinand, Paul Scholes, Wayne Rooney, and the Neville brothers.

However, not only did the Jack Grealish substitution feel a bit late tonight, Southgate was far too conservative in his thinking not to make the most of England’s attacking players available to him on the bench.

This is not a new criticism for Southgate but the difference tonight is England paid the price.

A special mention to my player of the tournament, Luke Shaw, for scoring the opener just 2 minutes in — the quickest goal scored in a European Championships final.

Along with Harry Maguire, United’s defensive duo were terrific throughout the Euros for England.

On a positive note — what a breakout tournament for these two. They’ve made us extremely proud & validated all the praise given at a club level. pic.twitter.com/N5eT6xm013

Rashford’s attention will turn to whether his injury requires surgery ahead of the new season and Sancho will soon have a spring in his step when his switch to United is officially announced.