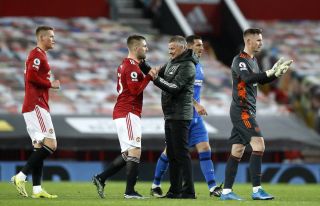 Luke Shaw’s resurgence was one of the success stories of the 2020/21 season and the defender is set to cap a brilliant season by starting for England in a final. The 25-year-old was left out of Gareth Southgate’s squad for nearly three years but has returned in glowing form.

Despite failing to start England’s first game of the tournament, Shaw has emerged as a candidate for the ‘player of the tournament’ after earning starts in each of England’s last five games. The defender is also second in the assists chart, just one behind the top spot.

Shaw has credited Ole Gunnar Solskjaer for his return to form this season, insisting that the Norwegian boss is never satisfied and is ‘always pushing me’.

“I like someone who obviously believes in me, and trusts me.”

“I didn’t have that for a while and it’s nice to have that now.”

An immense season for both club and country! 🔥 pic.twitter.com/z4iThRczmi

“We had a little conversation about it the other day, he said he’s always going to keep being on to me because he wants me to keep improving and getting better.

“That’s what I like, someone like Ole, who obviously believes in me and trusts in me. I didn’t have that for a while and it’s nice to have that now.”

Shaw, who has two years remaining on his current deal at Manchester United, is also said to be rewarded for his form with fresh terms at the club.

Despite the signing of Alex Telles last year, Shaw has earned a near-untouchable status at his club after a stellar campaign and is unlikely to be replaced by the Brazilian in the new season.