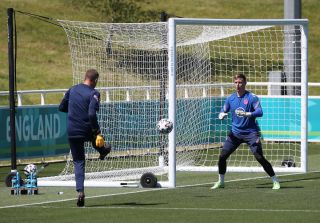 Dean Henderson is confident of England’s chances in tonight’s Euro 2020 final against Italy.

We are approaching kick-off at Wembley and the atmosphere has been building all day.

The Manchester United goalkeeper will be watching on as a fan having withdrawn from the squad with a hip injury, which we understand he initially sustained while playing for the Reds towards the end of the 2019/20 Premier League season.

“The whole nation is right behind the team, the weight is on their shoulders and they’ve got to deliver tonight, but they won’t worry about that and they’ll come out on top.

“I’m so confident, you wouldn’t believe, I’ve got so much faith in my teammates. I wouldn’t worry, trust me.

“I just know. I’ve just got that feeling it’s our year this year. Everything we’ve been through over the last 18 months… football has not been the same, last season was rubbish, I’ll be honest.

“There were no fans coming to the stadium and that’s what makes football.

“I’m looking out there today and you’ve got loads of loons having a great time, having a party. I’m coming to the game for the first time in a long time where I’m not playing, so I’m going to enjoy it as a fan.

“I’m looking out and I’m thinking, ‘this is football, this is what it’s about’, and I’ve just got a funny feeling this is coming home today.”

Henderson is never short on confidence when speaking.

However, it would have come as a disappointment to Henderson having to miss out on the Euros, but he will hardly begrudge Jordan Pickford having a successful tournament.

The Everton keeper could come under more pressure against the Italians than other sides, in the previous stages, but he’s managed well this summer.