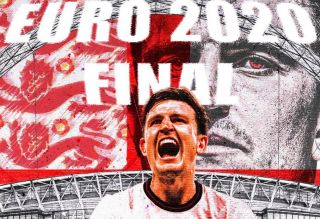 Lots of Manchester United fans will have an eye on tomorrow night’s Euro 2020 final regardless of whether they’re English or Italian.

Harry Maguire has been amazing for England throughout their Euro 2020 campaign, despite missing the beginning through an injury he picked up against Aston Villa towards the end of the 2019/20 Premier League season.

The Manchester United skipper took to Twitter on the eve of the Euro 2020 final to give a clear warning to Italy, and assurances to the people of England: “We’re ready to give everything.”

Then there’s Luke Shaw who has been the best left-back at the tournament. His form over the past 18 months has been incredible, and Ole Gunnar Solskjaer deserves massive credit for getting the best out of him when others doubted whether he could be a long-term option at United.

It hasn’t been the best tournament for Marcus Rashford, who has been a substitute for the most part, trying to play through an injury like he did for the majority of last season. He could miss the start of the new season if he requires operation, which is far from ideal from the manager’s perspective.

Jadon Sancho is another likely to be named on Gareth Southgate’s bench – with his United medical set to take place after the final.

Subscribe to the Stretty Newsletter – our latest newsletter takes a look at Juan Mata’s contribution ahead of the new season, the latest on Raphael Varane and more. Completely ad-free!