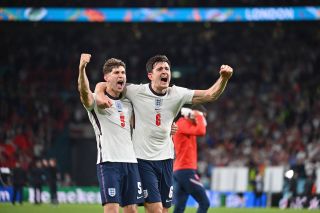 Harry Maguire’s timely return from injury came as a huge boost to Gareth Southgate but few could have imagined the impact Maguire would come to have on his side. The 28-year-old has impressed since his six-week lay-off and returned looking like he was never gone.

Maguire missed the first two games of the tournament after suffering ankle ligament damage in May but is now in line to be nominated for Player of the Tournament, with England conceding just one goal in six games.

The semi-final against Denmark on Wednesday saw the Three Lions secure their place in Sunday’s final but Maguire, who was wrongly booked in the second half, put in yet another flawless performance.

The colossus performance was backed up by the numbers, which proved that Maguire won 75% of his aerial duels, recovered the ball nine times, and made six passes into the final third.

Maguire’s remarkable rollercoaster year culminated in the showing against Denmark, having arguably stood at his lowest point the last time he faced Kasper Hjulmand’s side last year.