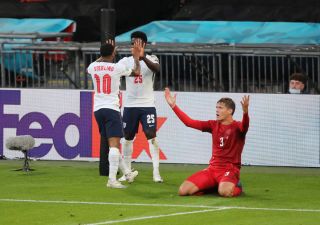 Manchester United will have three representatives at Sunday’s Euro 2020 final after England beat Denmark in their semi-final. The Three Lions were made to wait for confirmation of their progression after the visitors took the game to extra time.

Denmark opened the scoring in the first half through a 25-yard strike from Damsgaard but an own goal from Simon Kjaer swiftly leveled scores at Wembley.

Gareth Southgate’s side huffed and puffed but were unable to find the breakthrough in regulation time. Instead, a penalty in the first half of extra-time proved to be the difference between the two sides.

Harry Kane, who has a near-perfect record from the spot for England, missed the initial effort but scored the rebound after Raheem Sterling had won the penalty in controversial fashion.

Sunday’s final appearance will be England’s first since 1966, ending a 55-year long wait. Italy, who overcame Spain on Tuesday night, stand between them and a first European Championship trophy.

Harry Maguire and Luke Shaw both started the game and played the entire 120 minutes, whilst Marcus Rashford was an unused substitute. Jadon Sancho, who is yet to be registered as a Manchester United player, is also through.