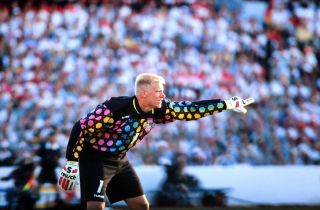 The legendary goalkeeper, who won the treble with Manchester United in 1999, believes his country’s progress in the tournament has sparked a new wave of football fever at home.

His son, Kasper, is playing between the sticks and he wasn’t too happy to be asked a question about football ‘coming home’, to which he hilariously asks has it ever been home?

Kasper Schmeichel did NOT like being asked what it would mean to stop 'football coming home' 👀#EURO2020 #ENG #DEN pic.twitter.com/uZVSuXLlTt

Peter Schmiechel, who unexpectedly won the 1992 European Championships, told MUTV: “I had big hopes for this Danish team.

“It was a very difficult beginning for them in the Euros, but they’ve overcome a lot of that difficulty and have managed to produce some really, really exciting results. I think it’s well deserved that they’re in the semi-final.

“People [in Denmark] are very excited, of course they are. Football has not really been top of the agenda for many, many years. Other things have taken over, other sports, other activities, social media, gaming. A lot of things have made football a secondary thing really but now, everyone’s talking about it, everyone’s excited, everyone’s watching it. We had people who have never watched football in their lives driving from Denmark to Amsterdam to watch the team!”

It has been a mixed campaign for Denmark up until this point when you consider how they lost star player Christian Eriksen in the first game, but the impact that event had on the Danish squad has been telling.

They are not there to simply take part and I would think Eriksen has something to do with the motivation behind them at the moment.

“The night Denmark played Wales in the last 16 was precisely 29 years after our win,” Peter added.

“If I’m honest, I think that we are a very good footballing nation. We are currently ninth in the FIFA rankings. I think we’ve lost [only] five games in 50. We qualify for all the big tournaments, we do well, we got to the quarter-finals of the World Cup.

“We might be a small country but in football terms we’re up there. We think we can compete with anybody, we think we can have the same chance as anybody, but of course we don’t have the same number of quality players as other nations have. So for us, it’s about creating an atmosphere and making sure everything is right on the day. Then it’s set up for us to make results.

“I’m absolutely sure [Kasper is looking forward to it]. They obviously had a little bit of a difficult time in Azerbaijan, in Baku, playing in very hot conditions. They had to stay overnight, travel back, they had one day in camp and then had to travel to England. So I’ve had limited time to speak to him but I’m sure he’s looking forward to it.

“It is everybody’s dream, every player in the world, I can guarantee you that, to play at Wembley. So to play a semi-final, for a place in the European Championship final, at Wembley? It doesn’t get much better.”

“I think it’s going to be tight. There are great similarities between the managers. [They are] very similar in their approach, man management, how they want to play the game, [they’re] very flexible, they keep very solid at the back and in midfield and then they have creativity in the wider areas and people who are getting on the end of chances up front. I really do believe this is very evenly balanced, in spite of what people may read in England. It’s very much about what happens on the day.”

Let us know if you agree in the comments section – the winner tonight plays Italy in Sunday’s final.