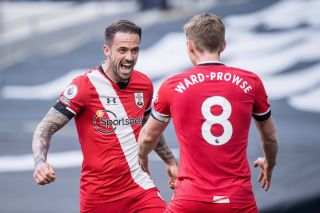 Danny Ings recently rejected a new four year contract with Southampton and now he is being linked with a move to Manchester United.

Ings, to his credit, has proven himself as a consistent goalscorer in recent years, albeit as an injury-prone player with history at Liverpool… He has scored 34 goals in 67 Premier League games since signing permanently for the Saints.

The Athletic claim United are admirers of the 28-year-old and I wouldn’t say no to another striker this summer.

As things stand, Edinson Cavani is leading the line with Mason Greenwood as backup but then what?

I know United have other players who could play centrally — Marcus Rashford, Amad Diallo and probably Jadon Sancho when he’s officially Red — but another goalscorer could make a big difference in games we are scrapping for goals.

Let us know in the comments section if you think Ings could do a job at United?