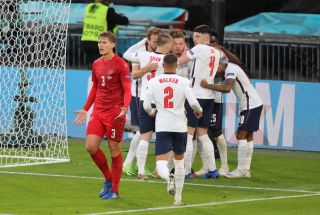 England have been held by Denmark and taken the game to extra-time as two first-half goals ensured the game went the full distance. Denmark opened the scoring with a wonderful 25-yard free-kick before an own goal from Simon Kjaer evened matters.

England were heavy favourites going into the game but a brave and resilient Denmark side were difficult to break down, creating their own chances in the process.

England made a late push to score the all-important winner but the goal eluded Gareth Southgate’s side, who will now face another 30 minutes of action in order to secure a place in Sunday’s final.

Harry Maguire and Luke Shaw both started the game, with the former coming excruciatingly close to scoring England’s second goal in the second half. Jadon Sancho and Marcus Rashford were both named on the bench and unused up until the 90th minute.