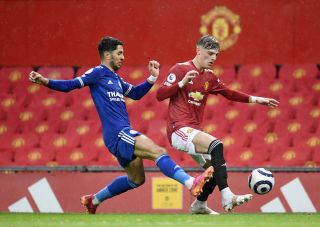 Southampton have been chasing Brandon Williams in recent months but a new report suggests the Saints are ‘confident’ they can finalise a deal to sign the young full-back on loan.

That’s according to The Athletic, who claim the two clubs have held talks with good progress made. Manchester United will have to listen to the player who is eager to get regular game time under his belt.

It seems that the only sticky spot in this deal is a loan fee — which United will insist upon if Southampton are to get their man on a season-long loan.

The Athletic add that Williams was keen to join Southampton on loan last summer, asking Ole Gunnar Solskjaer to permit the move following the arrival of Alex Telles, but he was kept for squad depth.

In hindsight, however, it was a wasted year for the young lad. He only managed 14 senior appearances which isn’t enough when you are a developing player in need of game time to strengthen and improve.

Southampton’s attempts to sign Williams in January were turned down again.

This time it looks like they will be successful and it will be big boost for Williams to be playing regularly in the Premier League. That way we will all get to monitor his progress next season, but as of now nothing has been done or set in stone.