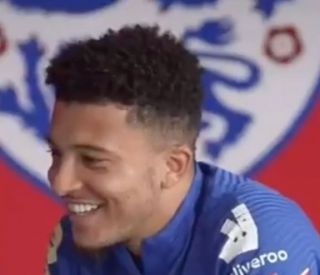 While Manchester United and Borussia Dortmund have reached an agreement over the transfer of Jadon Sancho, we must still wait for England’s Euro 2020 campaign to come to an end before the winger is able to undergo a medical in order to complete his switch to Old Trafford.

It’s been a long time coming but we are almost at the finish line.

Sancho has not got the minutes he wanted at the Euros, and didn’t start a game at the competition until an agreement was reached between United and Dortmund. It remains to be seen if he will start back-to-back games when England take on Denmark in the last-16, although ultimately all I care about is getting the Premier League season back underway and seeing Sancho in red.

One Liverpool fan was lucky enough to chat with Sancho via Zoom while he’s on international duty: “Congratulations on your transfer to Man United, but I’m a Liverpool fan, so I’m kind of salty.”

Sancho’s laugh in reaction is brilliant and he doesn’t say anything.

I hope he goes a step further next season and scores multiple goals against the Scousers.