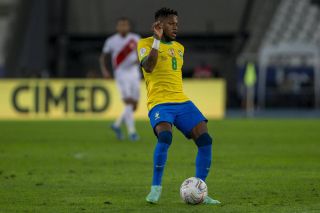 Brazil have qualified for the Copa America final after a 1-0 win over Peru, which means we’ll be rooting for Fred’s nation on Saturday!

The Manchester United midfielder played 85 minutes of the match and has starred a lot for Brazil this summer – assisting Neymar with a goal in the earlier stages of the tournament.

Now he could return to the Red Devils as a Copa America champion – a proper confidence booster ahead of a campaign his role in the United side is likely to come under question.

Brazil will face the winning of Argentina v Colombia in Saturday’s final at the Maracana and United assistant manager, Mike Phelan, was delighted to see Fred go all the way in the Copa America. All of our players could do with something to celebrate after the heartache of last season’s Europa League final.

Fred shared a post on Instagram to celebrate the win, writing: “We are in the final! Qualification deserved for the dedication and performance of our group. Let’s go with everything. Thank you God!”