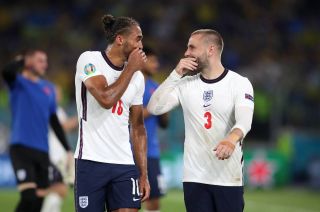 Luke Shaw’s resurgence is one of the stories of the summer after a stellar season with Manchester United. The 25-year-old withstood years of public criticism under Jose Mourinho but has now recovered to become one of the best left-backs in the world.

Shaw has started all of England’s last four games at Euro 2020 and has been credited with three assists, second to only one player in the entire tournament.

Shaw’s latest exploits against Ukraine caught the eye of Brazil legend Roberto Carlos, who praised the Manchester United defender after the game. Shaw, who has previously been humble in comparisons, has now reacted to the former Real Madrid left-back following him on social media.

“I couldn’t believe it, to be honest,” Shaw is quoted as saying by UEFA. “I didn’t actually think it was him at first. I clicked on it and saw he’d followed me and I sent it to my girlfriend and my friends and they were like ‘You haven’t even followed him back!’. It was just mad to see a massive legend like him … even following me was good, but to comment on my photo was even better.”

Humble as ever, the players’ player of the year at Manchester United is now set to start for his national side again on Wednesday when they take on Denmark.

A win over the Scandinavian side would see the Three Lions advance to a first final in a major international tournament since 1966.