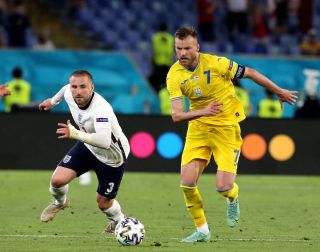 Luke Shaw is one of the best left-backs in the world right now.

If I said that a year ago or more, I would have been laughed at — and I have no doubt in my mind that Jose Mourinho still disagrees.

Manchester United don’t win anything for having the best left-back but helps bring optimism to the table, ahead of a new campaign which we all want to see the Red Devils go from runners-up to champions. And to reach the knockout stages of the Champions League this time around.

When asked about the reason behind Shaw’s surge in form over the last 18 months, Maguire said (via BBC): “His ability has always been there, he has every attribute to be one of the best left-backs in the world.

“The main difference I feel within Luke is his mentality in terms of pushing himself an the demands he’s putting himself on to not just be a six out of 10 in each and every game, not play comfortable, but to really push on and be himself to be the best player on the pitch. There’s no reason he can’t do that with all the attributes he has.”

🗣️"He has every attribute to be one of the best left-backs in the world."

Shaw registered two assists in England’s 4-0 win over Ukraine in the quarter-finals and will hope to continue delivering for the Three Lions to help them win their first ever European Championships.

Add a top centre-back to the squad and maybe another midfielder. Then United will stand a good chance next season.