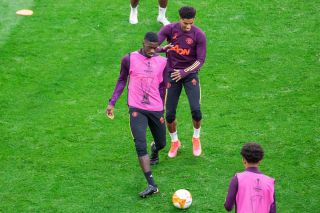 Dean Smith wants another centre-back and reports claim Aston Villa have been handed encouragement after holding talks with Manchester United over a possible transfer of defender Axel Tuanzebe.

That’s according to Football Insider, who claim Villa were intrigued over the possibility of seeing Tuanzebe leave Old Trafford, and we don’t think it is far from the truth.

United are expected to go into the transfer market to sign a new centre-back, so it would become a matter of too much competition for Tuanzebe, not that I don’t think he has the ability to make it. He needed a break at some point but has struggled to stay fit most seasons, which has been a hindrance to his development and potentially the reason the Red Devils might have to pass on a very good player.

I would like to see Tuanzebe become a success — whether it’s at United or elsewhere — and he’s already spent two seasons on loan at Villa previously, so Villa Park presents familiar surroundings.

The Villa fans will remember him fondly as he was their last promotion squad.

For instance, after making his senior debut back in 2017, Tuanzebe has only played 37 matches in all competitions for the club.

Signing another centre-back could spell the end of his time at the club.