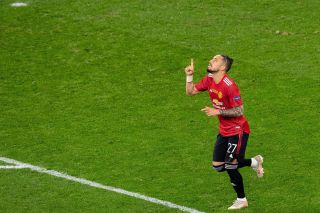 Simone Inzaghi will takeover at Inter Milan in the coming days and he has his work cut out if they are to keep the Series A title.

Inter are going to need to find replacements for Ashley Young and Achraf Hakimi with the latter deal not yet official, but it’s just a matter of time before he joins PSG. Ex-United winger/full-back Young has returned to Aston Villa where he looks set to retire.

And that may be good news for Manchester United left-back Alex Telles, who has been linked as an option for Inter, as per Calciomercato.

The Brazilian has already worn the Inter shirt in 2015/16 under Roberto Mancini, but things did not work out. Reports from Italy suggest Inter now see him as a ‘more ready and mature player’, therefore, Telles’ name could be part of the decision making process in Milan.

Telles’ situation at United won’t change this coming season. He is a back-up option to Luke Shaw and there’s no way he will be starting unless there are injuries in the team.

However, Inzaghi would be getting a player who can play full-back on both flanks with plenty of experience.

It is a wonder they are not looking at Diogo Dalot after his impressive displays at AC Milan last term.