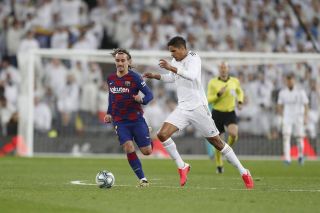 The Red Devils have been linked with a move to sign the Frenchman for years, but things seem to be getting serious this summer with the player wanting a fresh challenge.

Varane’s current contract at Real Madrid expires next summer and the Spanish giants won’t want to be losing any of their world class talent for free. Newly appointed manager Carlo Ancelotti has already lost veteran Sergio Ramos, who is likely to join PSG before the season begins.

“He’s a player who has won literally everything. He is someone who is out of contract next year so therefore available at a very reasonable price when you consider what good defenders are going for in the current market.

“It’s our understanding that Manchester United are prepared to pay €50m for Varane.

“Real Madrid do not want to lose for free in a year’s time.”

Manchester United already have Jadon Sancho over the line — pending medical, which will take place whenever England’s Euro 2020 campaign comes to an end. The right winger made his first start at the tournament in the quarter-finals against the Ukraine as England won 4-0.

Read more: How Man United could line-up with three new signings, including a blockbuster French duo in midfield