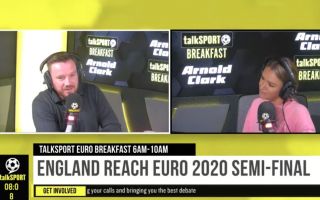 Luke Shaw has become an outstanding player for club and country despite many pundits and one ex-manager previously writing him off.

At Euro 2020, Shaw has continued his brilliant form that we saw over the past 18 months with United, and it’s no surprise that pundits like Jamie O’Hara are coming out from beneath their rocks to sing his praise.

Shaw used the harsh treatment he received from Jose Mourinho at United – and to this day, with his talkSPORT exclusive Shaw roasts – as motivation to reach his current level.

It hasn’t been an easy journey but what a player Shaw is turning out to be.

Listen to O’Hara hail Shaw in the talkSPORT video below — he thinks the United defender is one of the best left-backs in the world:

Let us know in the comments section if you think Shaw is, in fact, the best left-back in the world right now? Who is better?