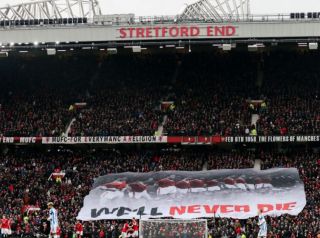 Football stadiums in England are set to return to full capacity from July 19 after the government announced plans to ease the COVID-19 restrictions on social distancing.

Manchester United has responded to this evening’s statement.

It’s positive news because it means the club can prepare to welcome back the fans for the new season – with the first game of the Premier League season at home versus Leeds United.

A Manchester United statement read: “We will now work through the detail of this announcement and any subsequent guidance from the football authorities to amend our plans, stadium regulations and supporter guidance ahead of our pre-season friendlies and the Premier League season.

“As part of that, our polices in relation to face masks, social distancing, capacities and ticketing will be reviewed and communicated to our fans to make attending our games as safe as possible, in line with the national guidance.”

United fans are urged to review www.manutd.com/reunited for the latest advice on attending games.

A final decision on whether to lift the remaining restrictions will be made next Monday – but the government plans for stadiums to operate at full capacity.

A Premier League statement read: “Fans have been hugely missed so we welcome today’s announcement by the Government, and are looking forward to full stadiums in the 2021/22 season.

“As we move towards a Government decision on Step 4 of the roadmap and beyond, we will continue to work with football stakeholders and relevant public authorities to ensure that the return to full capacity is done in a way that keeps everyone safe.”

What has Boris Johnson said?

Usually, my response would be, ‘I couldn’t care less’ but the British Prime Minister did speak about sports events at a press conference earlier today.

Johnson said (via LBC): “We will move away from legal restrictions and allow people to make their own informed decisions about how to manage the virus.

“From step four we will remove all legal limits on the numbers meeting indoors and outdoors. We will allow all businesses to reopen, including nightclubs, we will lift the limit on named visitors to care homes and the numbers of people attending concerts, theatre, and sports events.”