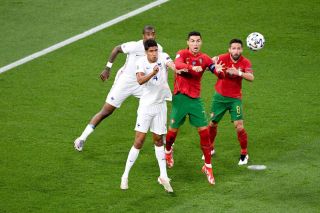 Manchester United don’t plan to stop their summer spending with Jadon Sancho and many fans would love to see the club sign centre-back and midfielder on top of that.

Raphael Varane is United’s number one target at centre-back and Marca claim the Red Devils have made a €50 million offer to sign the Frenchman.

The English newspapers have yet to claim there’s been an official bid, so I would hold fire believing any of this until it becomes more clear.

The same report suggests United ‘would make a proposal of around €25m’ for Eduardo Camavinga, who only has a year left on his contract. That’s £5m less than what Le Parisen claim – also credited in the Marca article.

It is claimed PSG and Real Madrid no longer see Camavinga as a priority.

And if United have a clear path to get the young midfielder now, without competition from either PSG or Los Blancos, it might be too good of an opportunity to pass on.

The 18-year-old has already made his France debut and became the youngest player to score with the senior team in more than 70 years.

Camavinga could be another brilliant signing for the future.