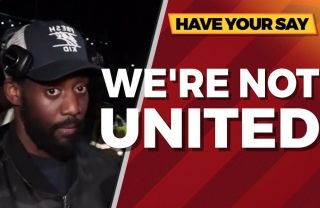 So we’re in the summer where the Euro’s have taken the focus off United to a certain extent, which is no harm really, given the incessant division between our fanbase the last few years.

This division seems to get worse as time goes by, sadly.

Unified, within reason, due to the inexplicable decision by The Glazers and a few other clubs who tried to leave the Premier League to create a European Super League, for a short while as demonstrations of protest were carried out and many tried to put their differences aside and come together to show the fanbase’s disdain at this attempted coup.

This calmed things for a while, but as with someone who has a gash on their leg, it was simply a bandaid over a gaping wound.

This gaping wound has been exacerbated during the COVID-19 pandemic, as the fanbase were kicked out of the stands, they took to social media to get their football fix, to speak with likeminded folk, to keep up to date with the ongoing’s at the club.

As if entering a lions den, they found that social media has a cancer on what is known as “football Twitter”, this cancer comes in the shape and form of Fancams and Fanchannels.

These social media wannabe’s saw their opportunity and took it with both hands, their audience now growing as droves of usually match going fans found themselves surrounded by this content, created by these clever characters, characters that have been created and built over time, to impersonate a football fan, a United fan, but sadly they can be seen through by the type of fan that attends home and away, and the couple of euro fixtures, a season.

I have written about these imposters before, it was met with anger by the fancammers & their minions, but as we come ever closer to a new season, it feels apt to discuss these cretins once again.

A few things have changed since the last time we spoke, namely the largest group The United Stand, has had an exodus of its main players, losing some of their most popular characters and with them, losing a lot of followers who would usually interact with them.

The United Stand, headed by Mark Goldbridge, transformed itself, it would appear, into the academy for these fancammers. A place where these characters find themselves a ready made fanbase of followers, to use to their own advantage, and gain a following.

What appears to be happening, is they’re realising they have used this platform to their benefit long enough and, rather than continue to line Goldbridge’s pockets, they’ve seen the chance to earn more, by doing their own thing or moving to another platform.

Goldbridge has a lot to answer for though, as it is he who drove on The United Stand to become the powerful group it has become, thus creating and allowing these characters to have their platform, to build their profile, to become “known”.

RantsNBants, probably the most dangerous of these fancammers, has left to do his own thing. A guy who’s background as a United fan is questionable at best, with an ice cold tongue, prepared to make outlandish claims that cause massive outrage. He’s dropped claims of racism at will, has an ongoing agenda against white footballers and an impetus on pushing the agenda of black footballers. He once suggested Ole only got the job because he’s white, as an example. While this guy was under Goldbridge’s stewardship, he was on somewhat of a leash, that leash is off now and he’s free to spread his vile messages as and when he pleases and he is roaming free like a villainous tyrant with outrageous claims following wherever he goes.

However, the relationship between Rants and Goldbridge has obviously soured beyond repair, as Rants declared war on Goldbridge in a truly shocking video clip where he claims Mark faked tears and emotion for views when Sir Kipsta, a young United fan, tragically passed away recently. Rants, joined on this stream by Arsenal YouTuber Lee Gunner, laughs and suggests the pressure is getting to Mark and jibes “the pressure isn’t going to let up, I can promise that” in what can only be seen as the statement of an ongoing agenda against TUS.

Flex, the one who did the fancams outside OT, has recently seen the opportunity to evacuate The United Stand and go it solo, setting up The United View. Just what we need, another group of these comical personas spreading hate and negativity. He states he will be continuing doing these fancams ouside the ground on matchday, so you can be sure he’ll be pushing clickbait style headers again, but under his own stewardship, not Goldbridge’s. Another who was on a leash of sorts while Mark kept an eye on the content going out, but now that leash is off, stand back and watch out.

One of the most worrying aspects of all of this is their relationship with other fancammers from other clubs.

Robbie from AFTV is an uncle to one, and it’s rumoured he’s the financial backer behind their new ventures.

Another’s brother is doing the same gig for Spurs.

It’s a strange web of deceit and fakeness, all in the name of the pound note.

Numerous other lesser known fancammers have left TUS, either going solo without a group backing them, or joining up with the above two, to try continue their adventure into becoming famous and earning money in a way that a lot of fans despise.

When we mention earning off this, just remember, people actually pay to have comments read out during these “watchalongs”.

Haven’t taken part? Well, a watchalong is exactly as it suggests.

You watch, while one or a number of these clowns watch a United game, and you get to listen to their thoughts, as opposed to actually watching the game itself.

We also have a collection of random oddballs who have jumped on this fancam adventure, the likes of Saeed (Realist) who reckons he’s “doing it for the culture”. If you’ve seen the vast amount of clips and screenshots of his escapades you’ll know exactly what he’s up to, getting on the coat tails of his mates and trying to get known.

RickTheRed – a convicted ticket tout, who has odd agendas regarding certain players and tries to play himself off as some sort of footballing authority and tactician, a rather odd individual.

Not to leave the ladies out of this, we have Mary from SheDevilsUnited, a female only fan channel.

An absolutely shocking rant about Paul Pogba and Ole, with more expletives than an episode of South Park, with some truly disgusting comments, got her some traction.

Rumours of bullying are rife in regards to the SheDevils, with one particular incidence coming to light where a female Twitter user left the platform as a result.

She’s a shock type character who’s set her persona up to cause controversy for likes and follows.

The above is just a selection of the characters involved in the fancam realm, who have set themselves up for what they view as success, by spreading negative and controversial agendas about players, the manager and the club, to push their financial gain from their followers and advertising.

Although not the most sensationalist of them regarding opinions, although he has his moments, the guiltiest of all of these of Goldbridge.

It is Mark who allowed the platform for these people to develop, to spread their opinions, to gain a following, but it also now Mark who is suffering as they jump ship and take aim at his empire.

He has a lot to answer for, when all is said and done.

But it seems he may be starting to lose the love for it all, through numerous mentions of retirement, although like George Foreman, he’s kept going long after he was relevant, his attitude seems to be losing that enthusiasm he once had.

He’s even gone as far as confirming to numerous sources that The United Stand will no longer be doing fancams outside the ground.

Easy day that Mark isn’t it, when those who did them for you have left to do their own and you never attend a game, too busy watching it on Sky with your minions paying you to do your Alan Partridge-esque act for their titillation?

It will be interesting to see what comes of this all when fans are finally allowed back to football.

I think many have now seen these fancammers for what they are during and it’s been mentioned that they will not be as free and comfortable to continue their behaviour outside the ground, by many a respected source within the matchgoing fanbase.

One of the saddest fallouts of all of this is the emergence of easily led lads who see what these lot have achieved (if it’s an achievement) and are now trying their hardest to copycat these parody type personas in a desperate effort to become noticed.

Reducing themselves to tweeting these more known frauds in an embarrassing cry for attention, spreading outlandish agendas to try gain recognition.

We’re looking at you JonnyFX.

I’ll return when new season starts with an update on the goings on of the fancam crew and their cronies.

For now, let’s look forward to Leeds and getting back into that ground!

2 responses to “The fancam circus”