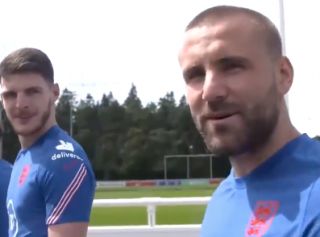 Luke Shaw has been incredible for the past 18 months and this summer for England he has been the best left-back at the European Championships.

We argued towards the end of the season that Shaw was the best left-back in the Premier League — before Jose Mourinho told talkSPORT that he’d start Ben Chilwell instead because the Chelsea full-back is seemingly better on the ball.

Hmm. About that, Jose?

Against the Ukraine, Shaw registered assists for Harry Kane and Harry Maguire and he now has 3 for the tournament, so with every goal contribution we’ve started to see comparisons made to Brazil and Real Madrid legend Roberto Carlos.

It looks like it’s a running joke in the England dressing room, with Declan Rice and Kane in the video below:

😂 "Shawberto Carlos" is really taking off in the England camp [@England] pic.twitter.com/IhGQf8kXJC