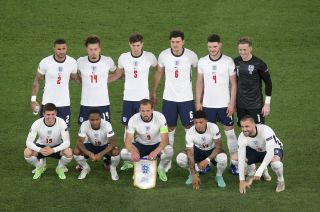 England, who ensured qualification for back-to-back major international tournament semi-finals on Saturday, was largely driven on by two Manchester United players and Jadon Sancho, who is imminently set to become one.

The 21-year-old winger is set to undergo a medical and sign his contract at the club after the tournament and was handed a first start at the tournament, impressing the onlookers with his unorthodox style.

Luke Shaw was the real antagonist in the game, however. The defender registered two assists in the game, taking his tally up to three – the second most in the entire tournament. The first of the night came just before the interval as Harry Maguire headed England into a 2-0 lead.

All three players have been included in WhoScored‘s team of the quarter-finals, as seen above, and Manchester United fans will be hoping for the trio to produce at Old Trafford when the season begins.