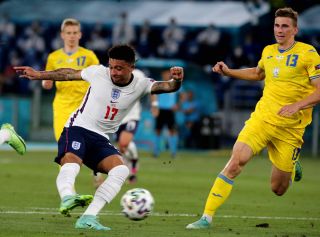 Soon-to-be Manchester United player Jadon Sancho impressed on his first start of Euro 2020 as England made it through to the semi-finals after a 4-0 win over Ukraine. The 21-year-old was integral to England’s attacking fluency and will be hard one by not to start the encounter with Denmark in four days.

Sancho is expected to officially join Manchester United after the tournament, with a fee already agreed with Borussia Dortmund. But the winger remained coy on the matter after the game against Ukraine, insisting that the focus is still on achieving success with his national side, rather than club matters.

“To be fair, I don’t want to talk about Manchester United. Right now I just want to focus on England,” he told BBC Radio5 Live, via Goal.

“I’m feeling over the moon. Today was must-win and I’m just happy to have got an opportunity to play. This is a special moment for me Every time I haven’t been playing I’ve been going back to training and been giving it everything.

“I’ve just been focusing on myself while I’ve been at England. I’ve always been ready if I needed to come on.”

Prior to the quarter-final against Ukraine, Sancho had been limited to just six minutes of action in the tournament, sparking suggestions that Southgate wasn’t his biggest admirer.

Doubts were quickly cast to the side, however, as the former Manchester City player was key to England’s victory and now has his sights set on Denmark at Wembley.