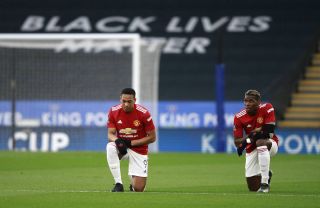 We would like to think, if the right offer came in United would listen because the Frenchman’s form was appalling last season. He didn’t score or create enough goals to warrant a starting role in the team and that is a worry going into the new season.

I don’t think Martial should be ahead of Mason Greenwood when it comes to the centre-forward role, which will be filled by Edinson Cavani a lot of weeks.

“There is the Anthony Martial situation,” Laurens told ESPN FC, as quoted by the Manchester Evening News. “He would want to stay at the club but he knows it’s quite unlikely he will play a lot next season between [Edinson] Cavani, [Mason] Greenwood and [Marcus] Rashford. I’m not sure where he stands in the pecking order.

“There will be a lot of clubs after him. Spurs were close to signing him before he made the big move to Manchester united from Monaco five years ago.

“I think Spurs would be interested in signing him because he will be much cheaper than what Manchester United paid for him.”

There is nothing to suggest Martial is for sale – but if the right offer came in, it wouldn’t be a bad idea to free up funds for future incoming deals. Another Frenchman named Raphael Varane is being strongly linked with a move to Old Trafford.

Martial could still go on to be a brilliant player but I have massive concerns. And the price should be higher for Premier League clubs who are interested in signing him.

He doesn’t start ahead of Marcus Rashford on the left either.