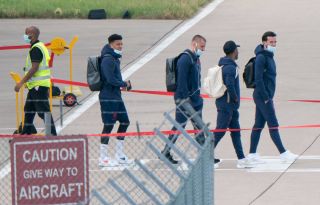 England take on Ukraine in their crunch quarter-final as they attempt to reach back-to-back semi-finals in major international tournaments. The Three Lions failed to get over the final hurdle in Russia three years ago but will face either Denmark or the Czech Republic should they get past Ukraine.

Luke Shaw, who has started the last three games in the tournament, impressed against Germany and was expected to start the game ahead of Chelsea defender Ben Chilwell.

Harry Maguire returned to the England fold in the group stage and was awarded with the ‘Star of the Match’ award for his fine display against Germany in the round-of-16.

The Manchester United captain was, however, a doubt for the game against Ukraine due to the risk of a semi-final suspension. The 28-year-old is one of three England players who are at risk of missing the next stage should they get booked.

Your #ThreeLions to take on Ukraine in tonight's #EURO2020 quarter-final in Rome! 👊 pic.twitter.com/QinwBH2W52

Jadon Sancho, who is on the verge of completing a transfer to Manchester United after the club announced it has reached an agreement with Borussia Dortmund, starts for the first time in the tournament.

The 21-year-old winger had been restricted to just six minutes of action in the four games leading up to the quarter-final. Marcus Rashford, who is the only Manchester United player not to start a game so far, is named on the bench again.