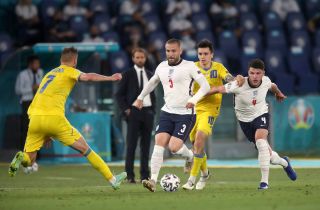 Luke Shaw has truly announced himself as a world-class footballer with his latest display in this summer’s European Championship. The left-back started for the fourth consecutive game and was credited with two assists, both in quick succession after the interval.

The 25-year-old was yet again at the heart of more or less every attacking move for England, linking the defence and attack in brilliant fashion. When spaces were occupied on the flanks, Shaw would drift inside and act as a fourth midfielder to great effect.

However, both of his assists on Saturday evening came from the flanks and perhaps Jose Mourinho will be watching from his hotel, believed to not be far away from the Stadio Olimpico.

Mourinho in the mud. pic.twitter.com/5S6jAGD6Ra

So in the week Jose takes charge in Rome, Luke Shaw drops a masterclass in the same city. Definitely a hotel room getting trashed as we speak now by the special one.

Mourinho said he wouldn’t even think about having Luke Shaw in starting 11.

Mourinho 🤝 collecting back to back Ls from Shaw

When did Luke Shaw become prime Roberto Carlos!Mourinho must be knocking back the scotch tonight #UKRvENG

Luke Shaw has been sensational. On Mourinho’s pitch.

Luke Shaw peppering Jose Mourinho in his own stadium!

England safely guided themselves to a major tournament semi-final for the second consecutive time, having also done so in the 2018 World Cup.

Gareth Southgate’s side is set to face Denmark, who eliminated the Czech Republic earlier on Saturday with a 2-1 win.