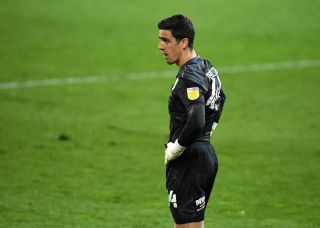 Joel Pereira is no longer a Manchester United player.

The goalkeeper’s contract expired this week and he is now free to join a new club on a Bosman.

This will come as no surprise to United fans, with Tom Heaton just after re-signing at the club as a free agent as well as Lee Grant getting a new deal. Pereira had already fallen down the pecking order at United — topped currently by David de Gea and Dean Henderson.

However, it is unsustainable to have two goalkeepers of that quality in the squad, so one of them will surely depart this summer — like Pereira has done after nine years at Old Trafford.

He took to social media to thank everybody connected with United: “2012-2021, 9 years as a Red. Thank you to every single person in the club for everything you have done for me. I feel very proud and honored to have played for the biggest club in the world Manchester United! A massive THANK YOU.”

Sadly it wasn’t to be for Pereira and last season he played the role as back-up keeper on loan at Huddersfield Town, playing two matches and conceding a whopping 11 goals.

He also spent time at Rochdale, Vitoria, Kortrijk and Hearts while on United’s books.

We would like to wish Pereira all the best in the future with his career.