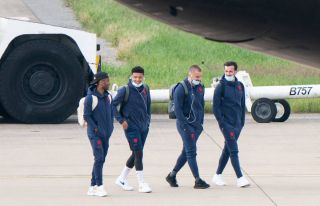 England will play with a back four against the Ukraine, with Jadon Sancho expected to be given his first start at the European Championships.

That’s according to the Telegraph, who report that Sancho, who is on his way to Manchester United, is in from the beginning of the match.

The report also claims that Chelsea midfielder Mason Mount, who missed the wins over the Czech Republic and Germany after being forced to sit out training while self-isolating.

It will give United fans a chance to see Sancho perform in an England shirt — not that there will be many bothered about that.

Fingers crossed he won’t experience any knocks or injuries against Ukraine.

It’s important to remember how solid England have been defensively and that could see them go all the way in this tournament, with Portugal and France already knocked out from the last-16 stages. Harry Maguire has played a big role at the back for the Three Lions, most notably against the Germans.