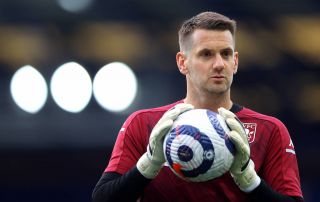 Manchester United have completed their first signing of the summer after sealing the return of goalkeeper Tom Heaton. The former Aston Villa and Burnley shot-stopper has penned a two-year contract at the club, with an option for a third year.

The 35-year-old joins Manchester United as a free agent with plenty of experience, having featured in the Premier League for his last two clubs.

“Yes, it does (feels like he’s coming home). That’s exactly how it feels,” Heaton told ManUtd.com.

“For me to have the opportunity to come back here after spending 13 great years here as a kid, yeah it’s an incredible feeling and I’m really, really excited to get started.”

Heaton left Manchester United in 2010 in a bid to gain first-team experience, having been stood behind both Edwin van der Sar and Ben Foster in the pecking order at the time.

“It feels like the right decision,” Heaton added on his decision to leave 11 years ago. “I knew at the time it felt right but it wasn’t easy. I’d been part of the club for so long and how much care I had for the football club. It was the right decision looking back and it’s justified it coming back here now with a lot more different experiences, a lot more security”

Heaton was confirmed as the club’s first summer signing on Friday but a move for Jadon Sancho is set to be finalized at the end of this summer’s European Championship, with an agreement in principle with Borussia Dortmund already announced.

The 21-year-old winger is set to sign for the club on a five-year contract, with an option for an extra year in 2026.