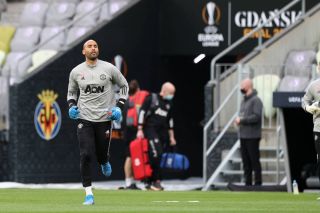 It was a busy Friday for Manchester United officials – the club confirmed a deal to sign Tom Heaton whilst contract extensions for both Juan Mata and Lee Grant were both announced as well.

Grant joined Manchester United in 2018 but is yet to make a Premier League appearance for the club, with the former Stoke goalkeeper thought to have taken up a coaching role behind the scenes.

Bruno Fernandes welcomed the news of Juan Mata’s extension, albeit joked that the Spaniard still occupies his favoured number eight shirt, and has done the same with the news of Grant’s renewed deal.

Another great news from today… really happy to see great professionals and exceptional people having what they deserve. Congrats #LeeGrant https://t.co/VnDmSEP77t

“Another great news from today,” Fernandes wrote on Twitter, as seen above. “Really happy to see great professionals and exceptional people having what they deserve,” he added.

The midfielder only joined the club 18 months ago but seems to have struck healthy relationships with most of the players at the club.

Grant, just like Mata, signed a one-year extension to his contract amid speculation over his future. With Tom Heaton’s addition, Solskjaer now has four goalkeepers on his hands.