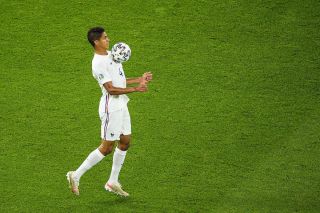 With Jadon Sancho’s deal all but completely wrapped up, we are keen to see who Manchester United are planning to move for next and reports from ESPN earlier today are being backed up in France.

We reported claims from ESPN’s Mark Ogden that Manchester United are edging closer to a deal for Real Madrid defender Raphael Varane. After taking over a year to get Jadon Sancho over the line, fans would surely appreciate if the club are quicker in completing their next deal.

France are out of the Euros which means Varane has some time to rest and sort out his future. Real Madrid will need him to renew terms or they risk losing him on a free next year.

Los Blancos have made repeat attempts to convince the Frenchman to stay, but it sounds like he wants to open a fresh chapter after winning all there is to win with the Spanish giants during his 10-year spell.

Telefoot journalist, Julien Maynard, now claims the player is in discussions with United and he could move to England before the transfer window shuts.

Maynard’s tweet translates: “In discussions with Manchester United, the defender of the Blues and Real Madrid Raphaël Varane could take the direction of England this summer. Nothing has been signed yet, but the positions of the two parties have moved closer in recent hours.”

He adds that talks moved closer in recent hours.

Let us know in the comments section if you think Varane would make a big difference alongside Harry Maguire?