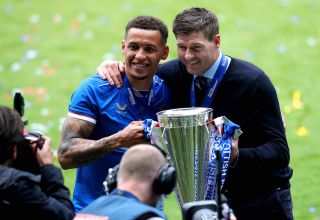 Manchester United are reportedly in the market for a right-back this summer and after suggestions that a move for Kieran Trippier had stalled, reports now claim that Ole Gunnar Solskjaer has set his sights on Rangers captain James Tavernier.

The 29-year-old enjoyed a stellar campaign under Steven Gerrard last season and won the Scottish Premier League without losing a game – and has now reportedly impressed teams in the Premier League.

According to 90min, Manchester United are monitoring the right-back after his breakthrough year in Scotland. The report claims that Brighton, Arsenal, and Norwich are also interested but the Reds could rest Rangers’ resolve with an offer.

Tavernier is a key player for Gerrard, scoring 19 goals and assisting a further 16 from his right-back position. Aaron Wan-Bissaka is the clear first choice at Old Trafford but the manager has long been keen to add competition.

Solskjaer could be looking to pull off a repeat of Alex Telles’ arrival last year – the Brazilian left-back revitalized Luke Shaw into one of the best defenders in the world.