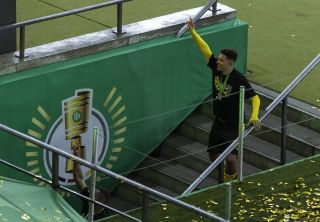 After reaching an agreement with Borussia Dortmund, Manchester United are set to complete the signing of Jadon Sancho after this summer’s European Championships, according to reports.

The mandatory medical examinations are typically the last detail of a transfer and according to The Telegraph journalist James Ducker, the 21-year-old will have his when his involvement in the summer’s European Championships ends.

Sancho has been used sporadically by Gareth Southgate this summer, featuring for only six minutes in the group stage before being an unused substitute in their 2-0 win over Germany on Tuesday evening.

Indications are Sancho fee is £72.9m with no add ons on top of that. He’ll have a medical with #mufc after the Euros. Story on @TeleFootball

There were suggestions on social media that Sancho’s experience in the Bundesliga could have helped England in a bid to reach the quarter-finals, but Southgate will feel that his decision was justified after safely making it through.

Sancho, who didn’t make his Premier League debut during his time at Manchester City, could now become the first signing of the summer at Old Trafford.

Read more: How much money Manchester United saved by waiting a year to sign Sancho