Ole Gunnar Solskjaer’s frontline has been bolstered with the arrival of Jadon Sancho – the winger is set to join the club after Manchester United and Borussia Dortmund reached an agreement over his transfer.

The 21-year-old is expected to undergo a medical examination once his involvement in this summer’s European Championship ends, thus completing a transfer 12 months in the making.

Sancho is expected to take up a role on the right side of Manchester United’s attack, but how does he fare compared to the other forwards at the club? 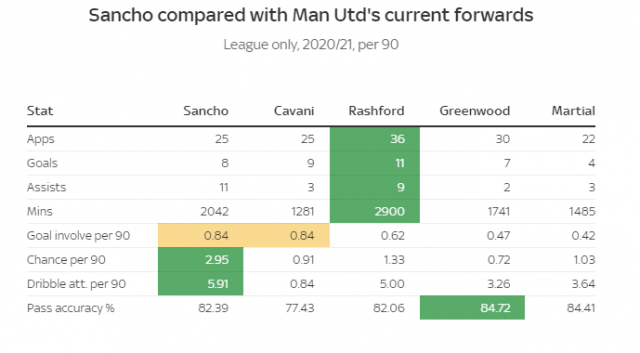 The graphic, as shown above, shows that the winger is beaten by Marcus Rashford in total goal involvements but is proven to be more productive than any of Solskjaer’s wide options.

Sancho’s chance creation per game more than doubles Marcus Rashford’s total of 1.33 and the former Manchester City player also comes out on top in dribbles attempted per 90 minutes.